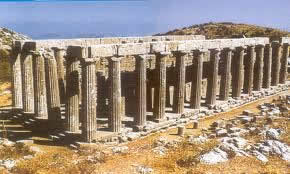 The temple of Apollo Epicurius at Bassae, Figaleia, is one of the most important and imposing temples of antiquity. The local people of Figaleia dedicated it to Apollo Epicurius (the helper) because he assisted them in overcoming an outbreak of plague. The temple stands at an impressive 1,130 m above sea level in the very heart of the Peloponnese on mountains that lie between the prefectures of Eleia, Arcadia and Messinia. It is situated 14 km south of Andritsena and 11 km northwest of Perivolia. The temple was built in the second half of the 5th century BC (420-410 BC) and has been attributed Iktinos, the architect who designed the Parthenon. This is a monument of global importance and also one of the best preserved ruins from classical antiquity and was the first site in Greece to be included in the UNESCO World Heritage List in 1986. Part of the frieze from the temple was broken off in 1814 and is now on display in the British Museum in London.